How have I made it through this week?

I'm not really eating. I just know that I have to put food in my body to keep me going but it's more out of fueling the body than out of any true hunger.

I'm not really sleeping. I tend to just roll around in bed trying to find a good position and lay there until my body just gives into the exhaustion.

I'm not really laughing. I've seemed to just shut down. Even yesterday someone said I was keeping a low profile at the office. God...when have I ever kept a low profile?

I'm not really living. I guess that's the best way to put it. For the past few days I've just been in a daze wondering how much more I can take.

I'm trying not to cry. But damn it's hard. It's so hard. I can't let my emotions get the best of me. Especially in the office.

I'm trying not to totally lose it. My stress levels are through the roof. And while it seems like it's something that everyone says, in my case it's totally true. I know what overly stressed feels like from a body standpoint and I'm there and then some.

I'm trying not to think of all of the possible bad outcomes. But even that's not an easy proposition.

I'm having a totally miserable week.

We laid off for more people at the office. I'm trying not to think about how much time I have left before they get rid of me too. So much work. So much information that left the building. I'm not depressed. I'm just concerned. I'm definitly down.

Not even the return of my faux husband to Broadway is cheering me up.
Posted by Unknown at 6:18 PM 1 comment:

Walk It Out, Fosse

Ya know...this is somewhat disturbing. Mainly because, as one friend put it, they are wearing far too much clothing for this song. Then again I don't think I want to see Gwen Verdon in square cut bikini bottom and a barely there top...

I know it's funny because it's probably the most amazing non-sequitir ever...

This Is a Bit Harsh 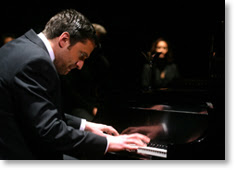 It's funny how you can see a show or hear a song so many times but it never really impacts you until you least expect it...well I saw Company again last night and prety much bawled my eyes out because this song unexpectedly hit me with emotions and feelings that I hadn't expected...so (with dialogue included) is the song...And many thanks to you for giving me this breakthrough moment...

PAUL: That's true, but there's more to it than that.
SARAH: Is that all you think there is to it?
HARRY: You've got so many reasons for not being with someone, but
Robert,
you haven't got one good reason for being alone.
LARRY: Come on, you're on to something, Bobby. You're on to something.

ROBERT:
Someone to need you too much,
Someone to know you too well,
Someone to pull you up short
And put you through hell.

DAVID: You see what you look for, you know.
JOANNE: You're not a kid anymore, Robby. I don't think you'll ever
be a kid again, kiddo.
PETER: Hey, buddy, don't be afraid it won't be perfect. The only thing
to be afraid of really is that it won't be.
JENNY: Don't stop now. Keep going.

ROBERT:
Someone you have to let in,
Someone whose feelings you spare,
Someone who, like it or not,
Will want you to share
A little, a lot.

SUSAN: And what does all that mean?
LARRY: Robert, how do you know so much about it when you've never
been there?
HARRY: It's much better living it than looking at it, Robert.
PETER: Add 'em up, Bobby. Add 'em up.

AMY: Blow out the candles, Robert, and make a wish. *Want* something!
Want *something*!

ROBERT:
Somebody, hold me too close,
Somebody, hurt me too deep,
Somebody, sit in my chair
And ruin my sleep
And make me aware
Of being alive,
Being alive.

Somebody, need me too much,
Somebody, know me too well,
Somebody, pull me up short
And put me through hell
And give me support
For being alive,
Make me alive.

Make me confused,
Mock me with praise,
Let me be used,
Vary my days.
But alone is alone, not alive.